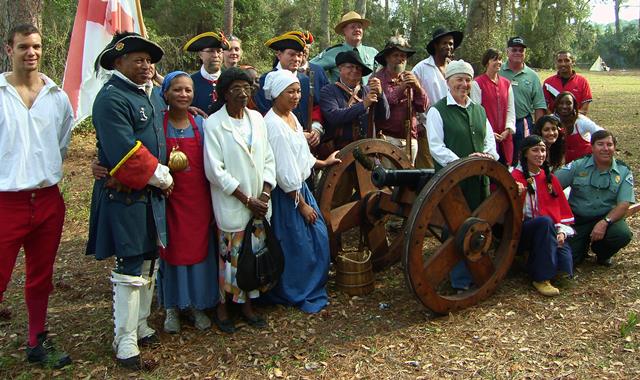 Each year, millions of people
visit St. Augustine. Many of them miss one of our most historically
significant sites. Just two miles north of downtown, the first legally
sanctioned free African settlement in the New World was established.

Today, it’s known as Fort Mose Historic State Park, but in
1738, it was named Gracia Real de Santa Teresa de Mose by the Governor
of Florida, Manuel de Montiano. In 1987, a team from the University of Florida discovered significant
archeological evidence of Fort Mose (pronounced “Moh-say”). That discovery and
additional research pieced together a remarkable story.

In the eighteenth century, the Spanish governor promised
freedom to slaves working in the Carolinas, a British territory. The
catch? The slaves had to travel more than 300 miles to St. Augustine. Driven to
desperation in their desire for freedom, nearly 100 slaves evaded alligators,
snakes and slave catchers to reach Spanish Florida. Like pilgrims at Plymouth
Rock, they were helped by Native Americans who taught them how to survive off the land.

Arriving in St. Augustine, the Africans built an earthen
fortress under the leadership of former slave Francisco Menendez, a Mandingo from
West Africa. Constructed of logs and mud, Fort Mose was a first line of defense
against the British. As Park Services Specialist Tonya Creamer said, “It was
like a early warning Doppler alert system. Castillo de San Marcos was the real
protection.” Two years after the Africans arrived, the British attacked St.
Augustine. Fort Mose residents escaped to the Castillo. By the time the British
were driven away, Fort Mose was demolished. The Africans lived in St.
Augustine while rebuilding their settlement. By 1752, the settlement had a
church and 22 huts housing nearly 100 people. They occupied Fort Mose for almost 25 years until 1763,
when the British reclaimed Florida. Spanish subjects, including Fort Mose
residents, left for Cuba. Today, nothing remains of the fort, but there are plans
to build a representative structure, hopefully by 2015.

Fort Mose is worth a visit for several reasons. What you
learn here may surprise you. “The Spanish slave system was very different from
the British system. Under the Spanish, slaves could own property and could work
their way out of slavery. They could even sue their masters for bad treatment. And
many people are surprised to learn that freed Blacks even existed at that
time,” Creamer said.

There’s something special about standing on the spot where
history happened. Visitors can walk or picnic amid
peaceful long leaf pines and live oaks close to where the settlement stood. Depending
on the season, the park’s historically accurate garden may be growing. Stroll
the two boardwalks overlooking the scenic marsh and Robinson Creek and you’re
likely to see wood storks, osprey and hawks.

To fully appreciate Fort Mose, watch the brief video at the
Visitors Center. Next, visit the museum, where state-of-the-art, interactive
exhibits give a glimpse into Fort Mose through stories of people who lived
here. “Fort Mose was a melting pot settlement, with interactions between Blacks,
Indians and Spanish. They all learned from each other,” said Creamer.

With picnic tables, a grill and room to play Frisbee, Fort Mose is a nice retreat. Open year-round, the grounds are free. Picnic tables are first-come, first-serve, but groups such as
family reunions may reserve space.

Fort Mose is seeking volunteers. To
learn how you can help, contact Tonya Creamer at 904-823-2232 or
Tonya.Creamer@dep.state.fl.us.

The park presents a variety of free monthly programs, from
guided nature walks to lectures and reenactments. On June 21-22, the park stages
its largest event, the Battle of Bloody Mose, commemorating the 1740, battle between the Spanish and British.
This lively event features a side-by-side battle reenactment, a cannon and
musket salute and a presentation of one of Spain’s oldest plays by
Florida Living History’s Theater with a Mission.

Disclaimer: Every effort is made to ensure the accuracy of City Blog information, but please verify hours, prices and important information before embarking on your Old City adventure.

Sharing and re-posting this blog is encouraged. Please credit OldCity.com when sharing.