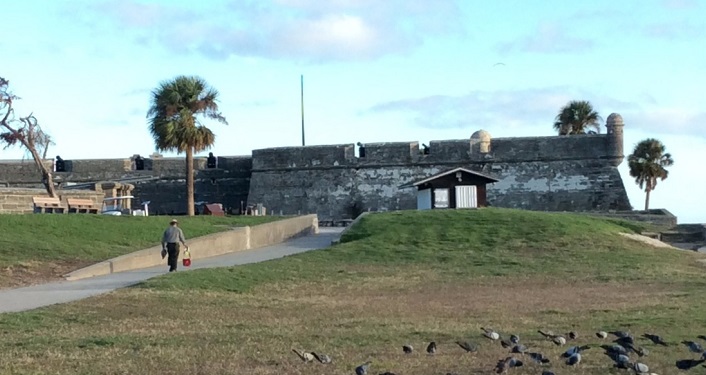 The entrance way to the Castillo de San Marcos.

This fort in St. Augustine just happens to be the oldest masonry fort in the United States as well as the only extant fort built in the 17th century in the United States. Its star shape is a true testament to technological advances in the colonial era, it is known as a “bastion system”. The bastion system is the method of adding wall formations and projections to buildings. Shortly after black powder weapons became popular (such as cannons and cannonballs) the bastion system was invented to help withstand or withhold cannonballs.

During this time, materials needed to build a fort were limited on Florida’s northeast coast. So, the Castillo was built with coquina, a semi-rare form of limestone. Coquina is the Spanish word for shellfish, and that is exactly what it is; the stone is constructed from thousands of broken shells from shellfish. While Coquina may have seemed an odd choice of building material at the time, it has proven its worth. The stone has a compressible nature to it. So, when a cannonball would hit a wall of the Castillo, the wall wouldn’t shatter. Instead, the coquina absorbs the blast and the cannonball would burrow into the wall.

Originally built under Spanish power, the British gained the fort in St. Augustine in a trade with Spain; at this time, the fort’s name was changed to Fort St. Marks. The fort was then regained for a short time by the Spanish in 1784. Then, 37 years later, the Spanish were forced to surrender the fort to the United States in 1821; the fort was named Fort Marion under the United States’ rule. Finally, in 1924, the fort was deemed a National Monument. The Castillo de San Marcos readopted its original Spanish name in 1942.

The Castillo fort in St. Augustine is open daily from 8:45 am to 5:15 pm. Admission for adults 16 and older is $15 and good for seven consecutive days; children 15 and under are free. The fort also hosts events frequently, you can check out those events here. 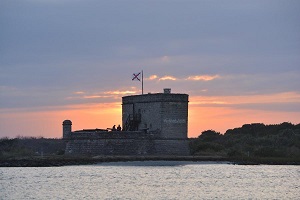 Just four years after the founding of St. Augustine in 1565, the Spanish built a watchtower and thatched hut to house six soldiers at Matanzas Inlet. They had realized that the inlet left St. Augustine vulnerable to enemies from the south and assigned soldiers to watch the horizons and warn the city if any ships were seen.

During its construction in July of 1741, the British attacked two Spanish ships in the inlet. However, the British were forced to retreat due to heavy fog and limited visibility. To no prevail, they tried again the next day but were greeted back by open fire from the Spanish. But the British didn’t give up. In September of 1742, British soldiers met to attack the fort in St. Augustine once more. However, by this time construction of Fort Matanzas was complete and when the British got there, a cannon fired from the fort scaring off the British. That following April, the British attempted one last attack. The cannons and fog wouldn’t stop them this time, but the heavy surf that day did keep them from approaching the inlet.

Fort Matanzas is open daily from 9:00 am to 5:30 pm and admission is free. You have to take a ferry to visit the fort as it sits across Matanzas Inlet. Ferry tickets are free and can be picked up from the Fort Matanzas Visitor Center. 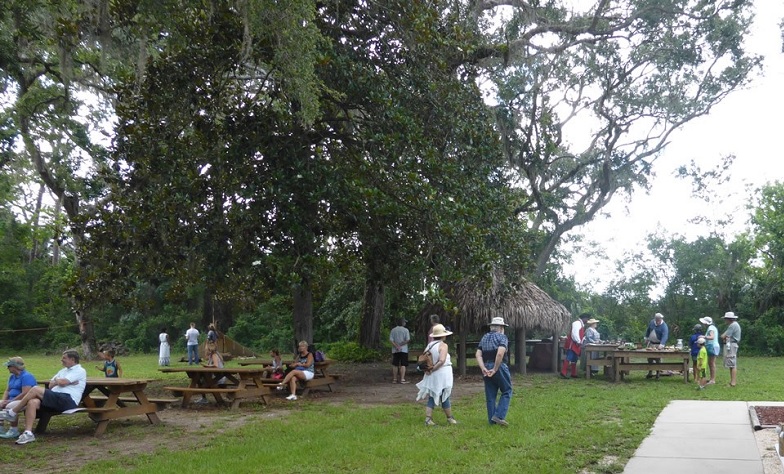 Fort Mose was the first free African settlement in the United States.

Contrary to popular belief, the first Africans to accompany Europeans to what is now the United States, were not the slaves who sailed to Jamestown in 1619. In fact, they were artisans, seamen, navigators, and adventurers that traveled alongside Spanish conquistadors and nobles.

When St. Augustine was founded in 1565, both free and enslaved Africans made great contributions to forming and maintaining the settlement; their expertise of blacksmithing, carpentry, cattle ranching, and military techniques proved to be invaluable. Meanwhile, in 1670 Charles Town, South Carolina (modern-day Charleston) was founded by the English. Soon after, enslaved Africans would outnumber whites; as a result, many enslaved Africans were able to break free and flee the town. Many of these ex-slaves traveled to the early settlement of St. Augustine and even helped in the construction of the Castillo de San Marcos.

Finally, in 1738 the Spanish Governor of St. Augustine chartered the settlement of Fort Mose (Gracia Real de Santa Teresa de Mose), the first free community of ex-slaves. As long as they declared their allegiance to the King of Spain and joined the Catholic Church, they were free to reside in the fort’s community as free men and women.

Fort Mose is part of the Florida State Park System.  The grounds of Fort Mose are open 9am to 5pm, 365 days a year.  The visitor center is open 9am to 5pm, Thursday through Monday.  There is no entrance fee to walk the grounds, but a $2.00 fee to enter the visitors center. There is no standing fort at this site, but it is in fact where the first free African settlement in the United States was. Park amenities include a trail, boardwalk, picnic area, and a museum. They also host frequent free events and reenactments.

Disclaimer: Every effort is made to ensure the accuracy of the information in this article. Please credit OldCity.com when sharing and re-posting. Photo credit: www.fortmose.org/