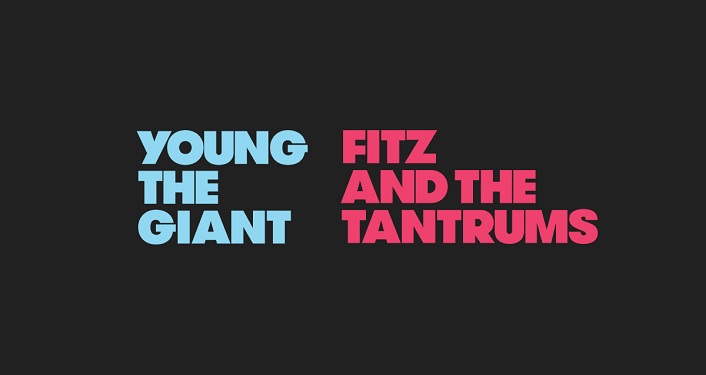 Young the Giant + Fitz and the Tantrums

California quintet Young the Giant draw upon the members’ international roots to forge a worldly blend of summery indie pop and anthemic stadium rock. Originally operating under the moniker the Jakes, the band dove head first into the mainstream in 2010 with the release of their debut LP, which included the RIAA gold-certified hits “My Body” and “Cough Syrup”. Subsequent offerings like “Mind Over Matter’ and “Home of the Strange” continued to hone their eclectic but accessible brand of modern rock and helped make them both radio and festival favorites, with high-profile appearances at Bonnaroo, Austin City Limits, and Lollapalooza, among others.

Led by songwriter Michael Fitzpatrick, Fitz and the Tantrums brew up a retro sound inspired by Motown and Stax Records. Fitzpatrick initially formed the Tantrums as a neo-soul solo project. Having purchased an old church organ, he found that it helped inspire his songwriting. While recording a solo EP, he recruited an old college friend, James King, to add horn arrangements to the material. The lineup grew from there, with the Tantrums eventually becoming a co-ed septet. “Songs for a Break Up, Vol. 1′ marked the group’s first release in 2009. Fitz & the Tantrums headed to South by Southwest the following year, stirring up some industry buzz in the process. In 2010, the band returned with its first full-length effort, “Pickin’ Up the Pieces”, featuring the single “MoneyGrabber”.