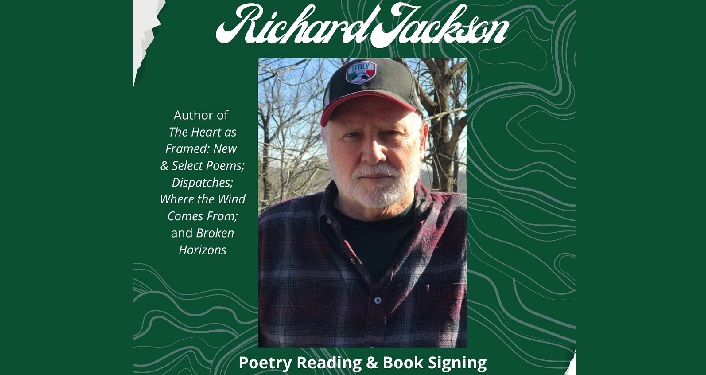 Join us on Wednesday, October 26, 2022 at 7:00pm in the Flagler Room at Flagler College for Visiting Writer Series – Richard Jackson.  Presented by the English Department, the event is an evening of poetry reading followed by a book signing.

Free and Open to the Public!

Jackson is the author of 15 books of poetry, including The Heart as Framed: New and Select Poems, Dispatches, Where The Wind Comes From and Broken Horizons. He’s also written 12 books of essays, interviews, translations and anthologies.

He has translated a book of poems by Alexsander Persolja (Potvanje Sonca / Journey of the Sun) (Kulturno Drustvo Vilenica: Slovenia, 2007) as well as Last Voyage, a book of translations of the early-20th-century Italian poet, Giovanni Pascoli, (Red Hen, 2010). I n addition, he has edited the selected poems of Slovene poet, Iztok Osijnik.

Mr. Jackson was awarded the Order of Freedom Medal for literary and humanitarian work during the Balkan wars by the President of Slovenia during his work with the Slovene-based Peace and Sarajevo Committees of PEN International. He has also received Guggenheim, Fulbright, NEA, NEH, and two Witter-Bynner fellowships, a Prairie Schooner Reader’s Choice Award, and the Crazyhorse Prize. Not to mention, he is the winner of five Pushcart Prizes, and has appeared in Best American Poems as well as many other anthologies.