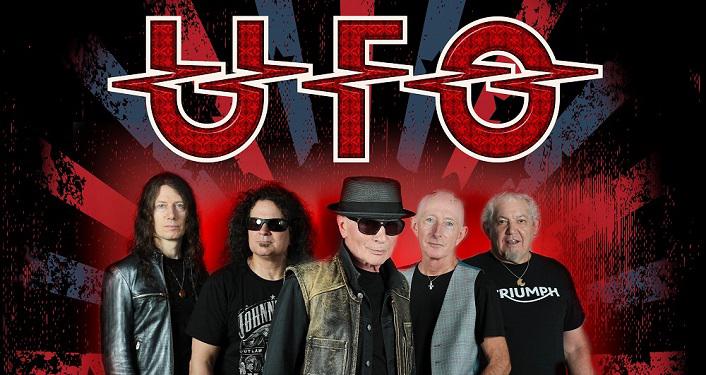 After Bolton left the group in 1974, former Scorpion Michael Schenker stepped in as a permanent replacement in time to record 1974’s “Phenomenon”, which sported a harder-edged guitar sound. Keyboardist Paul Raymond joined the band for 1977’s “Lights Out”. However, after 1978’s “Obsession”, Schenker left the group. Despite the addition of guitarist Paul Chapman, the next UFO LP, “No Place to Run”, failed to match the success of its predecessors.

After 1983’s “Making Contact”, UFO dissolved, only to re-form two years later for “Misdemeanor”. The group’s most popular lineup – Mogg, Schenker, Way, Raymond, and Parker — reunited in 1993 and recorded the 1995 album “Walk on Water”.  After a tour, the members yet again went their separate ways.

Schenker rejoined in 2000 along with veteran drummer Aynsley Dunbar for the two-CD “Covenant”, which featured one disc of new studio recordings along with one disc of live recordings. “Sharks” came out in 2002; then Schenker and Dunbar departed and were replaced by Vinnie Moore and Jason Bonham, respectively. This new band welcomed returning keyboardist Paul Raymond for 2004’s “You Are Here” and 2005’s live album “Showtime”.  Bonham was the next to leave and was replaced by the band’s original drummer, Andy Parker, for 2006’s “The Monkey Puzzle”.  “The Visitor” — an album recorded without the participation of Pete Way due to the bassist’s health problems — followed in 2009. “Seven Deadly” was released in 2012 and the band has toured extensively in the UK, Europe, Scandinavia, Brazil, the USA and Canada in support of this highly acclaimed album.