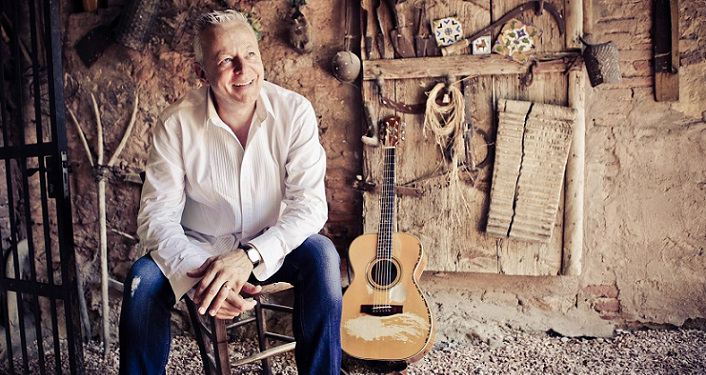 Emmanuel has achieved enough musical milestones to satisfy several lifetimes.  At the age of six, he was touring regional Australia with his family band. By 30, he was a rock n’ roll lead guitarist burning up stadiums in Europe. At 44, he became one of five people ever named a Certified Guitar Player by his idol, music icon Chet Atkins. Today, he plays hundreds of sold-out shows every year from Nashville to Sydney to London.

When you’re widely acknowledged as the international master of the solo acoustic guitar, what’s next is “Accomplice One”, an album of collaborations with some of the finest singers, songwriters and, yes, guitarists alive today. The list includes Jason Isbell, Mark Knopfler, Rodney Crowell, Jerry Douglas, Amanda Shires, Ricky Skaggs, J.D. Simo, David Grisman, Bryan Sutton, Suzy Bogguss and many more.

Influenced by the Merle Travis/Chet Atkins fingerstyle of guitar picking, Tommy developed a style of solo guitar playing that encompasses the range of a whole band, covering drums, bass, rhythm and lead guitar and a vocal melody simultaneously. No loop pedals, no overdubs, just one man and ten fingers.

Fiercely unconditional commitment to the songs, to the sound, to each other has defined Ida Mae from the start. It courses through the veins of the band’s brilliant debut, “Chasing Lights”.  Blending elements of vintage Delta blues and gritty rock and roll with boldly modern arrangements and fearless punk swagger, the record captures Ida Mae in its purest form. Chris Turpin and his longtime musical partner, Stephanie Jean, perform nearly everything live in the studio under the guidance of legendary producer Ethan Johns.

Visit the Ponte Vedra Concert Hall website for additional information and to purchase your Reserved Seating tickets. Tickets are also available at the Concert Hall and The Amp box offices.