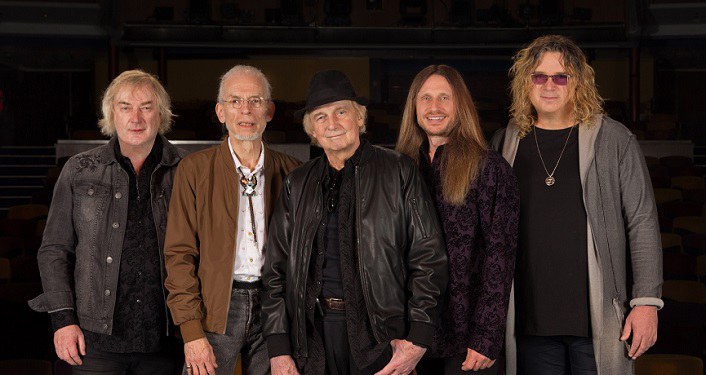 The best of British Rock will be at The Amp on July 18, 2019 in “The Royal Affair Tour”.  Headlined by progressive rock pioneers and Rock & Roll Hall of Fame inductees YES, this “must-see” best-of-British-rock show will also feature Asia with the return of founding member Steve Howe in a special performance, John Lodge of The Moody Blues, and Carl Palmer’s ELP Legacy with guest vocals by Arthur Brown.

YES is Steve Howe (guitar – joined 1970), Alan White (drums since 1972), Geoff Downes (keyboards – first joined in 1980), Jon Davison (vocals since 2011) and Billy Sherwood (guitar/keyboards in the 1990s and the late Chris Squire’s choice to take over bass/vocals in 2015), with Jay Schellen on additional drums. Look for YES to perform songs from throughout their storied career, one of rock music’s most prized bodies of work, and their set will honor the memory of YES members Chris Squire and Peter Banks.

Founded in 1968 by the late Chris Squire and Jon Anderson, Grammy-award winning recording artists YES has created some of the most important and influential music in rock history, such as iconic pieces “Roundabout”, “Close to the Edge”, “I’ve Seen All Good People”, “Owner of a Lonely Heart”, “Starship Trooper”, and countless others.

As part of the evening’s British theme, there will be Alan White of YES’ tribute to John Lennon; White was the drummer on Lennon’s solo material including the recording of “Imagine”.

Exclusive VIP, Meet and Greet, and merchandise packages available. Visit The Amp website for additional information and to purchase tickets. Tickets can also be purchased at their box office and at the Ponte Vedra Concert Hall box office.