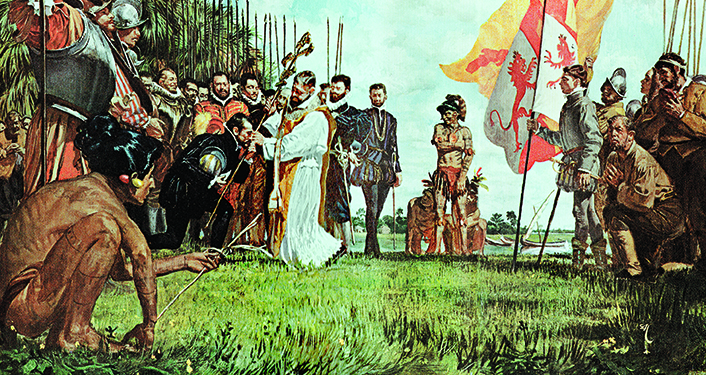 The 454th anniversary commemoration of Menéndez’ Landing, Founders’ Day and First Thanksgiving event will be held on September 7, 2019 at the Nombre de Diós Mission grounds and at the Fountain of Youth Archaeological Park.

It was here, on September 8th, 1565 that Pedro Menéndez de Avilés stepped ashore amidst the sound of trumpet and drum, the firing of cannon, and the shout of the six hundred which had accompanied him on his voyage from Spain to remove the French.  This landing of Pedro Menendez would mark Spain’s official possession of Florida!

A re-enactment of Menéndez’ landing will take place at Mission Nombre de Diós at 10:00am.  Following that, a Catholic Mass will be held at the Rustic Altar on the Mission grounds.  Salutes with cannons, pikes, flags, and arquebuses set up at the Fountain of Youth will accompany both Menéndez’ landing and his arrival at the Fountain of Youth from the Mission following the religious ceremonies.

A reenactment of the First Thanksgiving will take place after the arrival of Menéndez entourage at the Fountain of Youth.  Members of the Men of Menéndez will present living history demonstrations of weapons, material culture, military drills, and camp life in the afternoon.