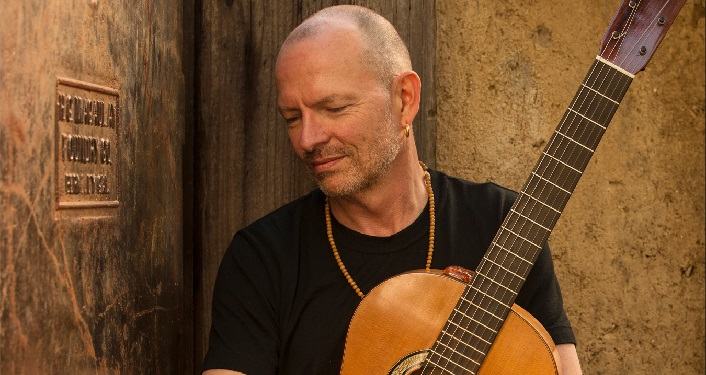 World-renowned guitarist Ottmar Liebert and his band Luna Negra will be in concert on Saturday, January 28, 2023 at the Ponte Vedra Concert Hall.

Liebert’s global success can be attributed to a myriad of things – his creative vision, his determination and a strong sense of melody.  Born in Cologne, Germany, he began playing guitar at 11.  He had intended to stay in Germany and pursue a career as a designer and photographer.  However, while journeying extensively through Asia and playing with other travelers and local musicians, he realized that he could not escape a life of music.

After pursuing his dreams of playing rock music in Boston, Ottmar settled in Santa Fe, New Mexico. It was a fresh start for Liebert in many ways.  In addition to returning to the acoustic guitar, he remained open to letting the place define the music he made.  It was this openness to the local landscape that defined what was to become his musical style – a mix of Spanish, Mexican and World elements, strong melodies tinged with a shade of melancholy, balanced with upbeat rhythms.

Liebert has since become one of the most successful instrumental artists of the past decades entertaining audiences around the world.  He’s released a catalog of 33 classic albums including live recordings, an orchestral album for Sony Classical, a binaural surround- sound recording, remix albums, a lullaby and a flamenco-reggae album.