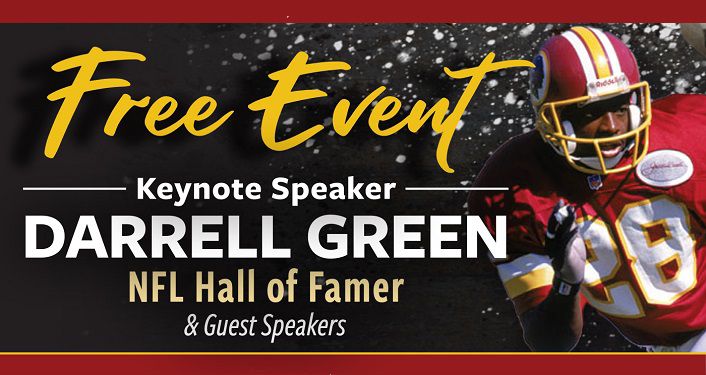 Make a Difference in the World Forum

Make a Difference in the World Forum

Washington Redskins Hall of Famer, Darrell Green, will share his story and reflections of life at the Make a Difference in the World Forum. The event is Wednesday, February 5, 2020 at 10:00am.

Green played for the Redskins as a cornerback from 1983 to 2002. During his career, he was known for his speed and was one of the fastest players in the history of the NFL. He was inducted into the Pro Football Hall of Fame in 2008. In October of 2019, Green was named one of the top 100 greatest NFL players of all time. In 1988, he founded the Darrell Green Youth Life Foundation, a faith-based charitable organization with a mission to “help children develop into leaders who positively influence their families and communities”.

Featured speaker, Frank Benischeck will discuss how to increase your income, reduce your taxes, uncover hidden taxes,and leave more for your heirs and favorite charities. Benischeck is the founder of Totus Tuus Consulting. He has appeared on CBS, FOX,and NBC morning shows and has been featured in Forbes Magazine. In addition, Benischeck has been a featured speaker at Harvard Business School and West Point Leaders Academy.

Guest speaker John R. Crawford s a board-certified tax lawyer. He was a past chairman for the Catholic Foundation Diocese of St. Augustine and named one of Florida’s super lawyers, an honor bestowed on only 5 percent of attorneys in the state.