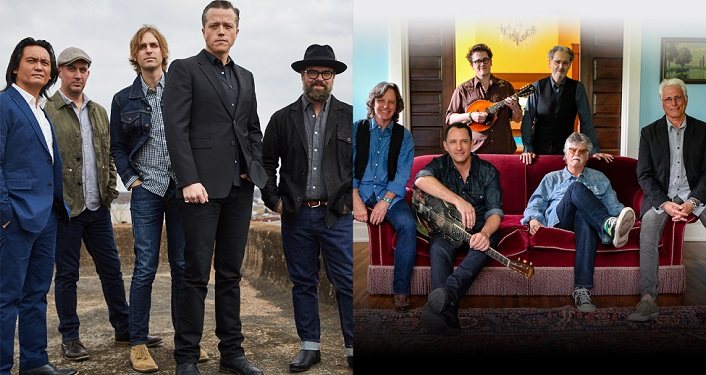 The Jason Isbell and the 400 Unit and Old Crow Medicine Show performance at the St. Augustine Amphitheatre on August 20, 2020 is rescheduled to Thursday, July 8, 2021.  Due to scheduling issues, Old Crow Medicine Show will not be performing on this tour.  The Nitty Gritty Dirt Band has been added to the bill.


All previously purchased tickets will be honored at the new date.  No new ticket purchase is needed. Click the event website link for all additional information.

Jason Isbell and the 400 Unit’s new album, “The Nashville Sound”, is a beautiful piece of American music-making. The songs on it send sparks flying into a culture that’s already running so hot the needle on the temperature gauge is bouncing erratically in the red. And while it’s understandable that in this moment some people want their radio to help them drift away, this finely calibrated set of ten songs is aimed right between the clear eyes of people who prefer to stay present and awake.

With a refreshed lineup and newfound energy, The Nitty Gritty Dirt Band remains one of the most accomplished bands in American roots music.  Following an extended 50th anniversary tour, the ensemble grew to a six-piece in 2018 for the first time since their early jug band days.  The group now includes Jeff Hanna (acoustic guitar, electric guitar), Jimmie Fadden (drums, harmonica), Bob Carpenter (keyboards), Jim Photoglo (bass, acoustic guitar), Ross Holmes (fiddle, mandolin), and Jaime Hanna (electric and acoustic guitar).  All six members also sing.  When their voices merge, the harmonies add a powerful new component for the legendary band.  And, with the father-son pairing of Jeff and Jaime Hanna, the band carries on a country music tradition of blood harmony.