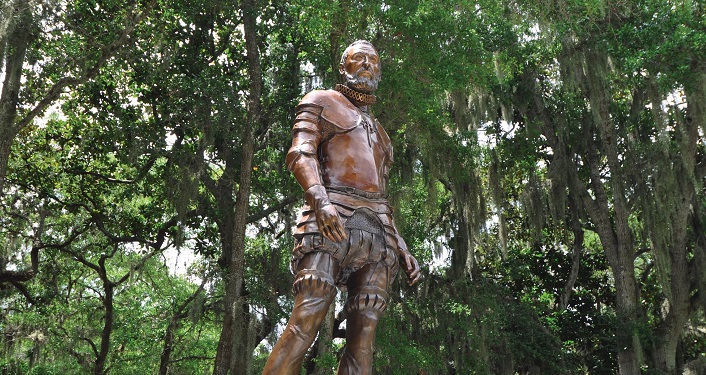 To commemorate the 500th birthday of Pedro Menendez de Aviles, the founder of Saint Augustine, Historic Florida Militia will present a week long celebration, Festival de San Agustin.  There will be several events to celebrate the City’s Spanish Heritage starting on February 9th and concluding on February 16th.

February 9, 2019 — School of the 16th Century at the Colonial Quarter.  Experience life as it was in Saint Augustine in 1565. Historically dressed re-enactors will demonstrate both military and civilian activities.

February 14, 2019 at 7:00pm — PBS Documentary “The Secrets of Spanish Florida”.  This critically acclaimed documentary, featuring many of the re-enactors in town, tells the story of how America really began.   Shown on the big screen at the Colonial Oaks in the Colonial Quarter, this event is Free and open to the public.  Beverages and food will be available for purchase.

February 15, 2019 at 10:00am — Wreath Laying Ceremony.  Members of the Historic Florida Militia will participate in the City’s official Wreath Laying Ceremony at the Statue of Pedro Menendez in front of the City Hall. This event is free and open to the public.  Birthday cake and coffee will be available in The Alcazar Room following the ceremony.

February 15, 2019 at 5:30pm — History on the Streets Saunter. Living History re-enactors will all be dressed in sixteenth century attire and will saunter along St. George Street and the Historic District.

February 16, 2019 at 2:30pm — Paseo.  A Spanish tradition, a Paseo is a lively and colorful spectacle that includes drums, flags, large papier-mâché heads and historically clad participants. The event, free and open to the public, starts at the Visitors Information Center and will make its way down Saint George Street to the Governor’s House Museum.

February 16, 2019 at 6:30pm — Noche de Festival.  A celebration of the 500th Birthday of Pedro Menendez held at The Fountain of Youth Archaeological Park.