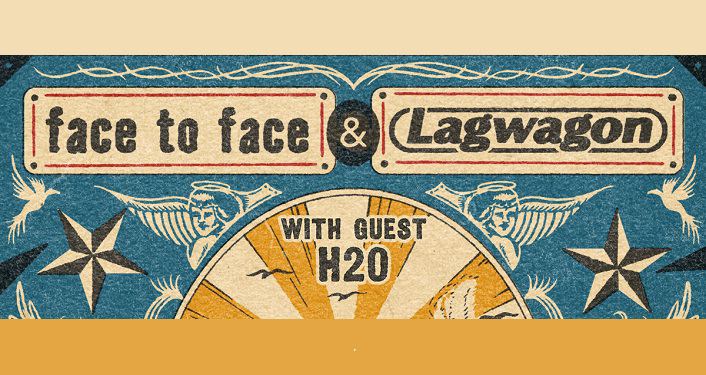 Face to Face and Lagwagon

SoCal punk rock bands Face to Face and Lagwagon with guest H20 co-headline the Backyard Stage at The Amp on Saturday, October 19, 2019.

Face to Face got together in the early ’90s, delivering no-frills, fast-paced blasts that trod familiar anti-authority punk ground. Following their 1992 debut, “Don’t Turn Away”, their popularity peaked. After an extended hiatus and almost a decade removed from their prior release, they returned with a matured, restrained punk-rock sound that carried them into the 2010s.

Lagwagon formed in 1990 and was originally dubbed Section 8. Their lineup frequently fluctuated during their formative period. By the time of the band’s 1992 debut, “Duh”, the band was comprised of singer Joey Cape, guitarists Chris Flippin and Shawn Dewey, bassist Jesse Buglione, and drummer Derrick Plourde. Over the years, the lineup has still fluctuated. “Hang”, their eighth full-length and first in nine years, arrived in the fall of 2014.

Visit The Amp website for additional information and to purchase your General Admission ticket(s). Tickets are also available at the Ponte Vedra Concert Hall and The Amp box offices.