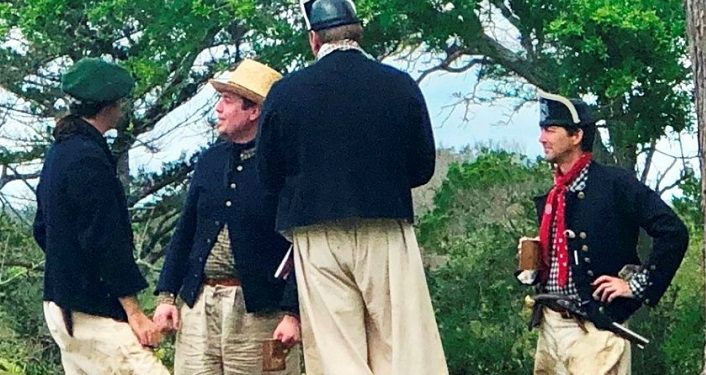 On Saturday, April 6, 2019, Florida Living History, Inc.’s (FLH’s) volunteers, will present COME ALL YE BOLD HEROES: The Evil Necessity from 9AM to 4PM and from 7PM to 8PM.  This heritage event, presented in partnership with the National Park Service’s Castillo de San Marcos National Monument and The Colonial Quarter, focuses on the role of the Royal Navy in British East Florida and the colonial port of St. Augustine during the American Revolution.

During the day-time portion of the event at the Castillo de San Marcos, sailors from the Royal Navy will talk about their role in fighting the American rebels while protecting Britain’s sea-trade and about life aboard His Majesty’s fleet.  Loyalist troops will be seeking soldiers to march against the American revolutionaries. Visitors to the Castillo de San Marcos NM will be invited to “take the King’s Shilling” and enlist. Those who sign on will tour their new barracks, learn about the equipment and food with which King George will supply them, and practice 18th-century close-order drill under with their sergeant’s watchful eye.

In addition, regular soldiers of Florida’s British Army will be on hand to demonstrate the daily life of a soldier on this frontier of the Empire, while the ladies of the garrison will discuss what it means for wives and children to “follow the drum”.   The event concludes at 4PM when Sgt. Batten, of the South Carolina Royalists, will issue a passionate appeal to the townspeople of St. Augustine, urging them to enlist and win glory by defending the Crown and Empire!

At 7PM, beginning at St. Augustine’s City Gates, FLH’s volunteers will recreate a 1777 raid by a Royal Navy press gang along St. George Street, in the heart of St. Augustine’s historic district, seeking to forcibly impress (that “evil necessity”) locals into service in His Majesty’s navy. Following the Event, participants and visitors may adjourn to the Bull & Crown Tavern at The Colonial Quarter.

There is a Castillo admission fee of $15 per adult (age 16 and older); children (age 15 and younger) enter for free, but must be accompanied by an adult. Admission to Sgt. Batten’s recruitment speech at 4PM on the Castillo lawn and the “press gang” re-enactment along St. George Street are free of charge to the public.