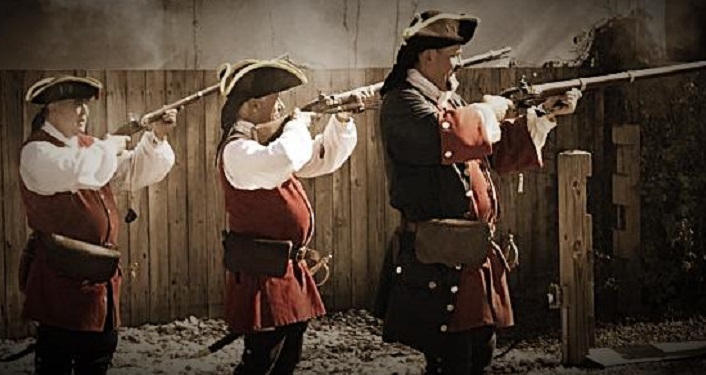 Changing of the Guard Ceremony

The Changing of the Guard Ceremony, performed by the St. Augustine 1740 Spanish Garrison, commences at approximately 6:15pm, 6:30pm.  Participants will muster at the Colonial Quarter at 5:45 pm and split into two groups.  One squad of soldiers, militia, and colonial civilians will march along Saint George Street to the area of the Government House where a historic interpreter will speak to the public giving them details of the performance.

A short time later a second squad of soldiers will march along Saint George Street, from the City Gates, and also stop in front of the Government House. The two groups will converge to perform the Changing of the Guard ceremony .  Commanding Officers will inspect the newly arrived troops, then the relief troops will exchange places with the Soldados already stationed on guard duty. The relieved troops will then fire musket volleys.

Come out and enjoy the sights and sounds of our fabulous town and to mingle with the Historical Interpreters for photographs and to ask questions!