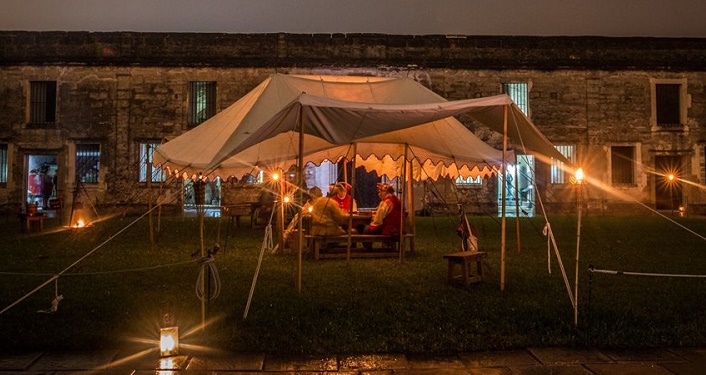 Castillo by Candlelight: Enemy at the Gates

Begin the Colonial Nightwatch with a special candlelight tour entitled Castillo by Candlelight: Enemy at the Gates.  British General James Oglethorpe laid siege and was poised to run the Spanish from the city. Citizens – terrified about the possibility of losing their homes – clung to the hope that the Spanish forces would strike a blow from the Castillo that would send the English invaders away.  A desperate plan was conceived to attack the British occupiers of Fort Mose.

Visitors will experience the evening before the Fort Mose counterattack and learn about life in the town during the siege as the cannon fire away at the British on Anastasia Island.

Tickets are limited! Advance reservations are recommended.  Non-refundable tickets go on sale two weeks prior on a first come, first serve basis. Tickets can be purchased in advance by calling 904-829-6506, ext 233 or at the Castillo ticket booth.