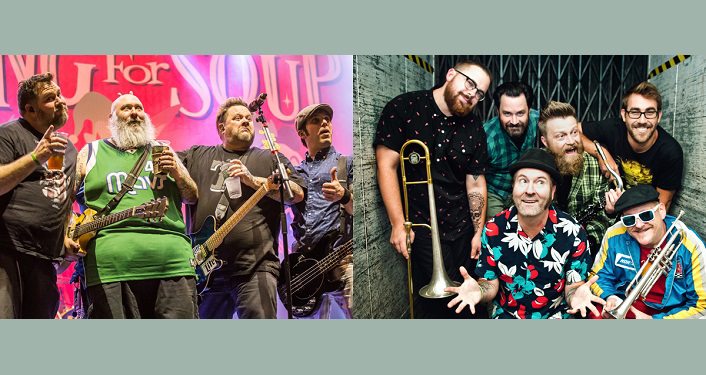 Bowling For Soup and Reel Big Fish at The Amp

Pop-punk band Bowling For Soup and ska-punk heroes Reel Big Fish, along with guest Nerf Herder, will be playing at the Backyard Stage at The Amp on Saturday, June 22, 2019.

There’s a song on Bowling For Soup’s 2014 Greatest Hits Album, (“Songs People Actually Liked: Volume 1”), “20 Years, That’s A Lot Of Beers”, that’s a lighthearted autobiographical sprint through all the things the band has achieved together in their first two decades. It’s a song full of fun and camaraderie, which sums up Bowling For Soup perfectly; they’ve always felt like your friends as well a band, and of course, they are the band you can wave to!

As the band approaches their twenty-fifth anniversary in the coming Summer of 2019, the world of Bowling For Soup is a very exciting place to be a part of. Bowling For Soup’s unique brand of hooked filled pop punk music has gone all around the world and back again. Songs such as “High School Never Ends”, “Punk Rock 101”, “1985”, and of course the Grammy nominated “Girl All The Bad Guys Want”, resonate as much today as when they were written and are proving extremely popular in the modern streaming world.

Reel Big Fish were one of the legions of Southern California ska-punk bands to edge into the mainstream following the mid-‘90s success of No Doubt and Sublime. Like most of their peers, they were distinguished by their hyperkinetic stage shows, juvenile humor, ironic covers of new wave pop songs, and metallic shards of ska. The group cultivated an underground following that broke into the mainstream in summer 1997, when the single “Sell Out” become a modern rock radio and MTV favorite.

Visit the Amp (St. Augustine Amphitheater) website for additional information and to purchase tickets. Tickets can also be purchased at their box office and at the Ponte Vedra Concert Hall box office.