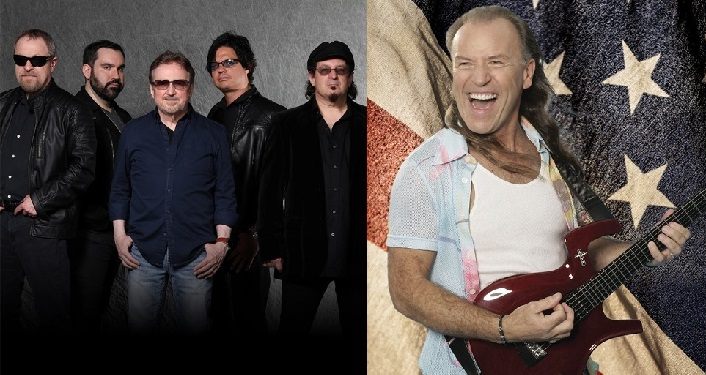 Rock legends Blue Öyster Cult will be in Concert at the St. Augustine Amphitheatre with special guests Mark Farner’s American Band. The limited-capacity concert is Saturday, May 22, 2021.

Blue Öyster Cult has been thrilling fans of intelligent hard rock worldwide with powerful albums loaded with classic songs for over four decades. They are revered within the hard rock and heavy metal scene for its pioneering work. The band occupies a unique place in rock history as one of very few hard rock/heavy metal bands to earn both genuine mainstream critical acclaim as well as commercial success.

BÖC’s smash hits include three stone-cold classic songs that will waft through the cosmos long after the sun has burned out: “(Don’t Fear) The Reaper”, “Godzilla”, and “Burnin’ for You”.

Legendary all-American frontman and guitarist Mark Farner was the engine that pulled the original Grand Funk Railroad to the top of the charts. Today he’s a platinum recording artist 30 times over. At age 67, Farner commands the stage with the same intensity and outpouring of love as he did at 20 during the summer of ’69. His fans are still flocking to their captain.

Tickets are sold in pre-configured pods (groupings) ranging from two to eight seats per pod. Each pod is at least six feet from one to the next. All seats within the pod must be purchased together.

Tickets are also available at the St. Augustine Amphitheatre Box Office; open Fridays from 10:00am-6:00pm and Saturdays from 8:30am-12:30pm. Payment via debit or credit card only accepted.