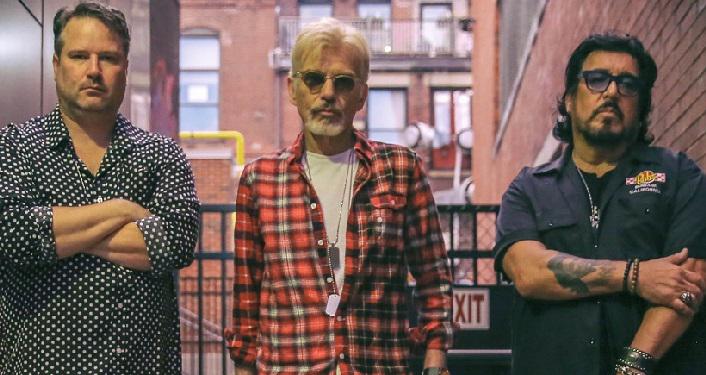 Billy Bob Thornton and The Boxmasters

Electric rockabilly band Billy Bob Thornton and The Boxmasters will be performing at the Ponte Vedra Concert Hall on Monday, July 15, 2019.  Consisting of actor, musician and drummer Billy Bob “Bud” Thornton,  J.D. Andrews (bass, guitars, and vocals), as well as Michael Wayne Butler (guitars and lap steel), Billy Bob Thornton and The Boxmasters put a unique spin on the genre by adding a dash of British Invasion-era rock to the mix.

In late 2017 and 2018, The Boxmasters had the honor to team up with legendary Engineer/Producer Geoff Emerick for an album that Geoff has called, “One of the most exciting projects I’ve worked on since The Beatles”. The album, “Speck”, is to be released on June 7th through KeenTone Records /Thirty Tigers. Sadly, before “Speck” was formally released, Geoff passed away. Known for taking over the engineer’s chair on The Beatle’s albums “Revolver”, “Sargeant Pepper’s Lonely Hearts Club Band” and more, Geoff added a familiar sonic touch to the sound of The Boxmasters, who have been unapologetic Beatles and British Invasion fans.

“Speck” touches on all of The Boxmaster’s nfluences, including The Beatles, The Byrds and Big Star but there are new sonic touches as well. Ukulele, cardboard boxes and the Beatle’s famous “teatowels on the drums” trick pop up on songs throughout the album.