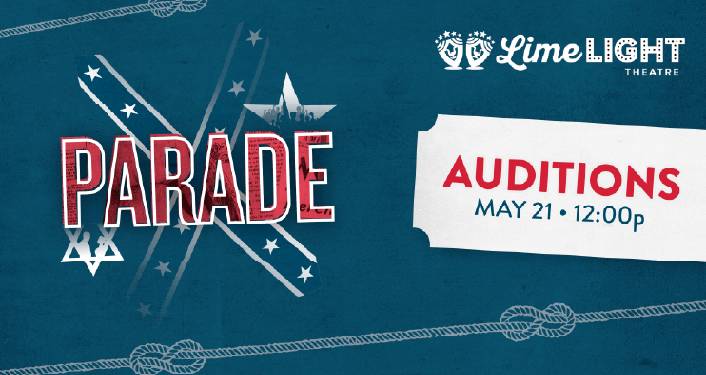 Audition at Limelight for Parade

There will be an open audition on Saturday, May 21, 2022 at Noon at the Limelight Theatre for the upcoming production of Parade.

Book by Alfred Uhry | Music and Lyrics by Jason Robert Brown. Co-Conceived and Directed on Broadway by Harold Prince. Based on the true story of the trial and lynching of Leo Frank.

Audition Details:
* Prepare 16-32 bars of a song from one of Jason Robert Brown’s musicals. An accompanist will be provided. No tracks and no acapella. Please do not sing a song from Parade.
* Be prepared to participate in cold readings from script
* Bring theatrical resume and headshot (if available)

About the Show:
In 1913, Leo Frank, a Brooklyn-raised Jew living in Georgia, is put on trial for the murder of thirteen-year-old Mary Phagan, a factory worker under his employ. Already guilty in the eyes of everyone around him, a sensationalist publisher and a janitor’s false testimony seal Leo’s fate. His only defenders are a governor with a conscience and, eventually, his assimilated Southern wife who finds the strength and love to become his greatest champion.