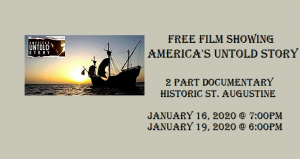 Free Film Showing of America's Untold Story Of all the films being screened at the St. Augustine Film Festival, this one may be of special interest; America's Untold Story, a four-hour documentary about Historic St. Augustine. When PBS aired the original two-hour documentary, "Secrets of Spanish Florida - Secrets of the Dead" in December 2017, [...]