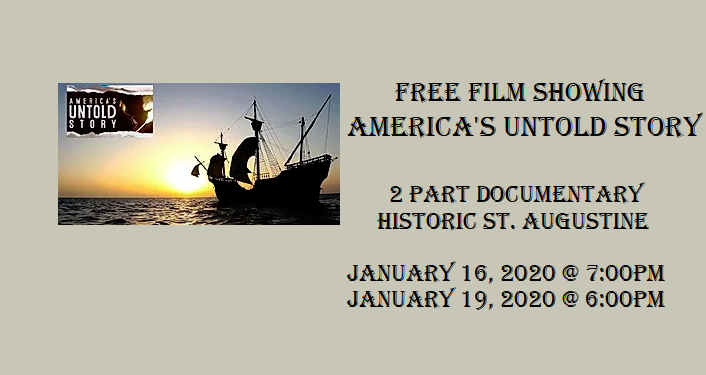 Of all the films being screened at the St. Augustine Film Festival, this one may be of special interest; America’s Untold Story, a four-hour documentary about Historic St. Augustine.

When PBS aired the original two-hour documentary, “Secrets of Spanish Florida – Secrets of the Dead” in December 2017, much of the story was still left untold. So a four-hour version, America’s Untold Story, was released on DVD.  Now in a two-part presentation, America’s Untold Story will be shown free of charge on Thursday, January 16 at 7:00pm, and Sunday, January 19 at 6:00pm at Flagler College’s Lewis Auditorium.

The film tells the story of the first permanent European settlement in the nation, founded two generations before the Pilgrims arrived in 1565.  America’s Untold Story uncovers the story of America that never made it into textbooks.  The film, narrated by Jimmy Smits, was shot in and around Saint Augustine.